A recent survey by Lending Tree found that nearly half of Americans are thinking about moving in the not-to-distant future and it appears that the COVID-19 pandemic may be at least part of their motivation. Crissinda Ponder writes that the health crisis has affected nearly every aspect of daily life, and with 11 million Americans unemployed, residents make an exodus from major cities, a desire for more living space. There is no reason to think that housing choices would be any less affected.

The Lending Tree survey covered 2,000 consumers and 46 percent said they were thinking about relocating within the next year. Twenty-seven percent are considering a new home in their current area, with a primary motivation of reducing their living expenses. Another 12 percent would consider a nearby city, while 8 percent would like to move to a new state.

Reducing living expenses was cited by 44 percent of all respondents. Other reasons frequently given were:

Renters also frequently said they didn't like the way their property was being managed.

Homeowners were less likely than renters to be considering a move, 39 percent versus 56 percent and the wanderlust is also more pronounced among those who work remotely, with nearly two-thirds considering a move compared to only 31 percent of commuters. Ponder said remote work is unlocking a different type of demand for both homebuyers and renters who wish to move, which is highlighted in a related, breakout survey of remote workers conducted by LendingTree. That survey found that 47 percent of Americans were working from home and about a quarter of those were thinking about relocating locally, largely because they needed different features such as a home office.

The pandemic has changed the living situation of 38 percent of respondents, most commonly forcing them to move in with family or friends or having family or friends coming to live with them. Buying a new home or finding a less expensive rental were also among the top changes. More than half (52 percent) of Gen Xers report their living situation has changed because of the pandemic. That's compared with 49 percent of millennials and just 10 percent of baby boomers.

The success of the U.S. residential real estate market, like any other market, is determined by supply and demand. This means we need to look at how many potential purchasers are in the market versus the number of houses that are available to buy. With early 2020 housing data now rolling in, it’s quite evident there are two big stories impacting this year’s residential real estate market:

ShowingTime is a firm that compiles data from property showings scheduled across the country. The latest ShowingTime Showing Index reveals how showings have increased in each of the country’s four regions for five months in a row.

Move.com also just released information indicating that the number of homes currently for sale has declined rapidly and now sits at the lowest level in almost a decade. They explained,

“National housing inventory declined 13.6 percent in January, the steepest year-over-year decrease in more than 4 years, pushing the supply of for sale homes in the U.S. to its lowest level since realtor.com began tracking the data in 2012.”

In response to these numbers, Danielle Hale, Chief Economist at realtor.com, said,

“Homebuyers took advantage of low mortgage rates and stable listing prices to drive sales higher at the end of 2019, further depleting the already limited inventory of homes for sale. With fewer homes coming up for sale, we’ve hit another new low of for sale-listings in January.”

The decrease in inventory impacted every price range, too. Here’s a graph showing the data released by move.com: 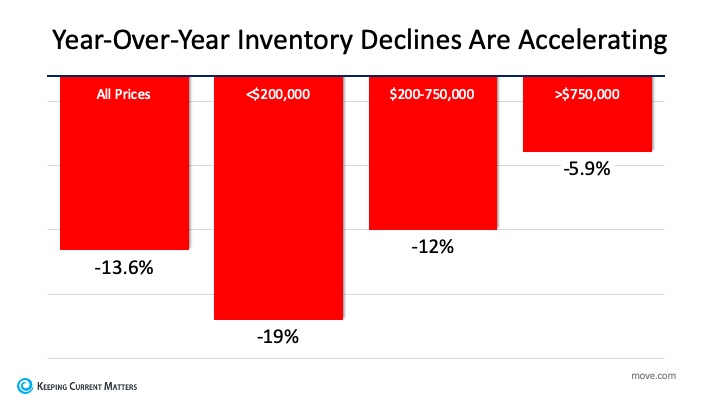 Since there’s a historic shortage of homes for sale, putting your home on the market today could drive an excellent price and give you additional negotiating leverage when selling your house. Reach out to a local real estate professional to determine if listing your house now is your best move.

Freddie Mac: Here’s what to expect from the housing market in 2020 and beyond Mortgage rates should stay low, leading to another big year for refi’s.

Just over a year ago, mortgage rates nearly hit 5%, levels that hadn’t been seen since the

early part of this decade. But as we get ready to move into a new decade,

mortgage rates are more than a full percentage point lower than that, comfortably

And according to a new forecast from Freddie Mac, mortgage rates should stay that low for the rest of this year and well beyond that.

In Freddie Mac’s newest housing market forecast, the company’s economic and housing research group states that they expect mortgage rates to remain around 3.8% for the rest of 2019 and stay at that level for all of 2020 and 2021.

As other recent forecasts and mortgage market data has shown, this year’s unexpectedly low mortgage rates have driven a rise in refinances, as well as a surge in home purchases.

Freddie Mac agrees and expects the good times to keep rolling. In its latest forecast, the government-sponsored enterprise expects there to be $846 billion in refinance originations this year, and $834 billion more in refis next year.

Both of those figures would be more than $300 billion more in refis than there were in 2018.

On the purchase side, Freddie Mac expects there to be $1.255 trillion in purchase originations this year. And the GSE expects those figures to rise in both 2020 and 2021.

Despite home sales and purchase originations projected to rise over the next few years, Freddie Mac currently expects 2021 to see a decline in total mortgage volume from 2020’s expected level due to a decline in refis.

The GSE’s forecast expects to see just $429 billion in refis in 2021, perhaps a function of there simply not being that many people left who have not refinanced their mortgage by then, especially if mortgage rates stay as low as they are currently expected to.

“The economy has seen increased volatility in November as hopes for a favorable resolution to the trade dispute have recently waned,” said Sam Khater, Freddie Mac’s chief economist.

“However, given low interest rates, modest inflation and a solid labor market, the U.S. housing market continues to stand firm, and, our forecast is for the housing market to maintain momentum over the next two years.”